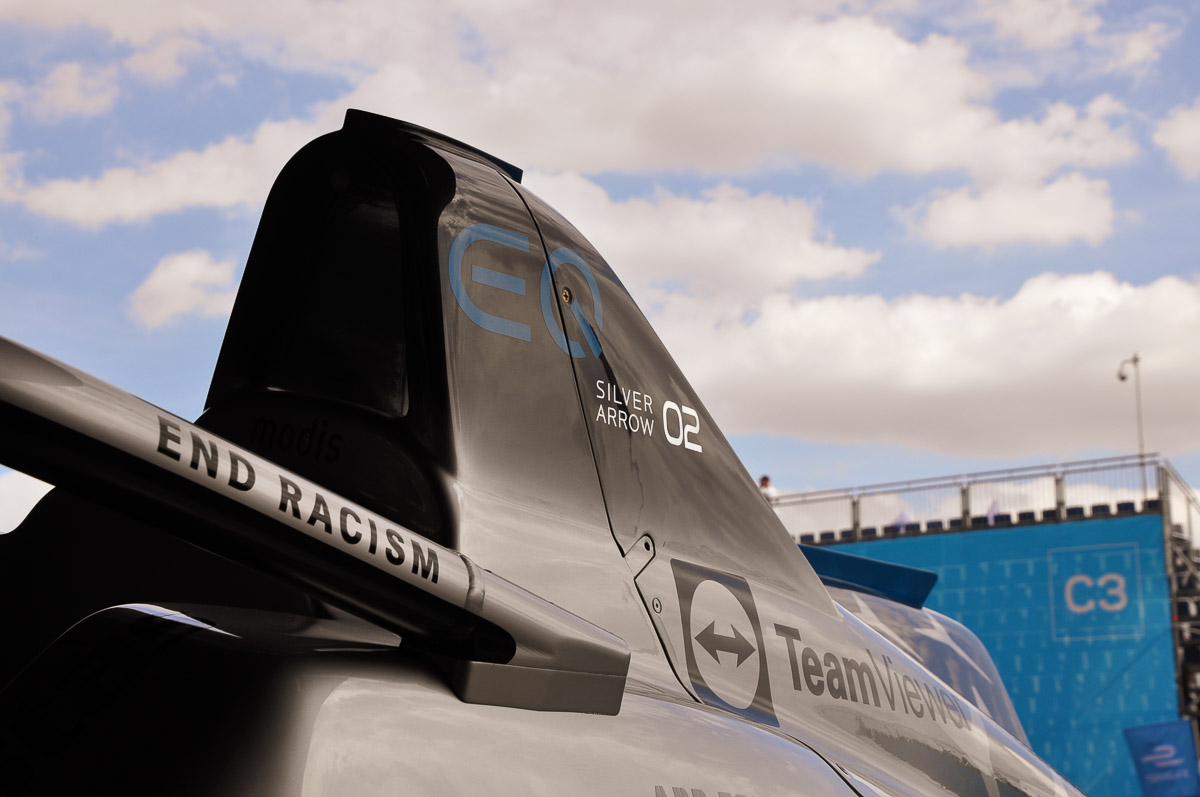 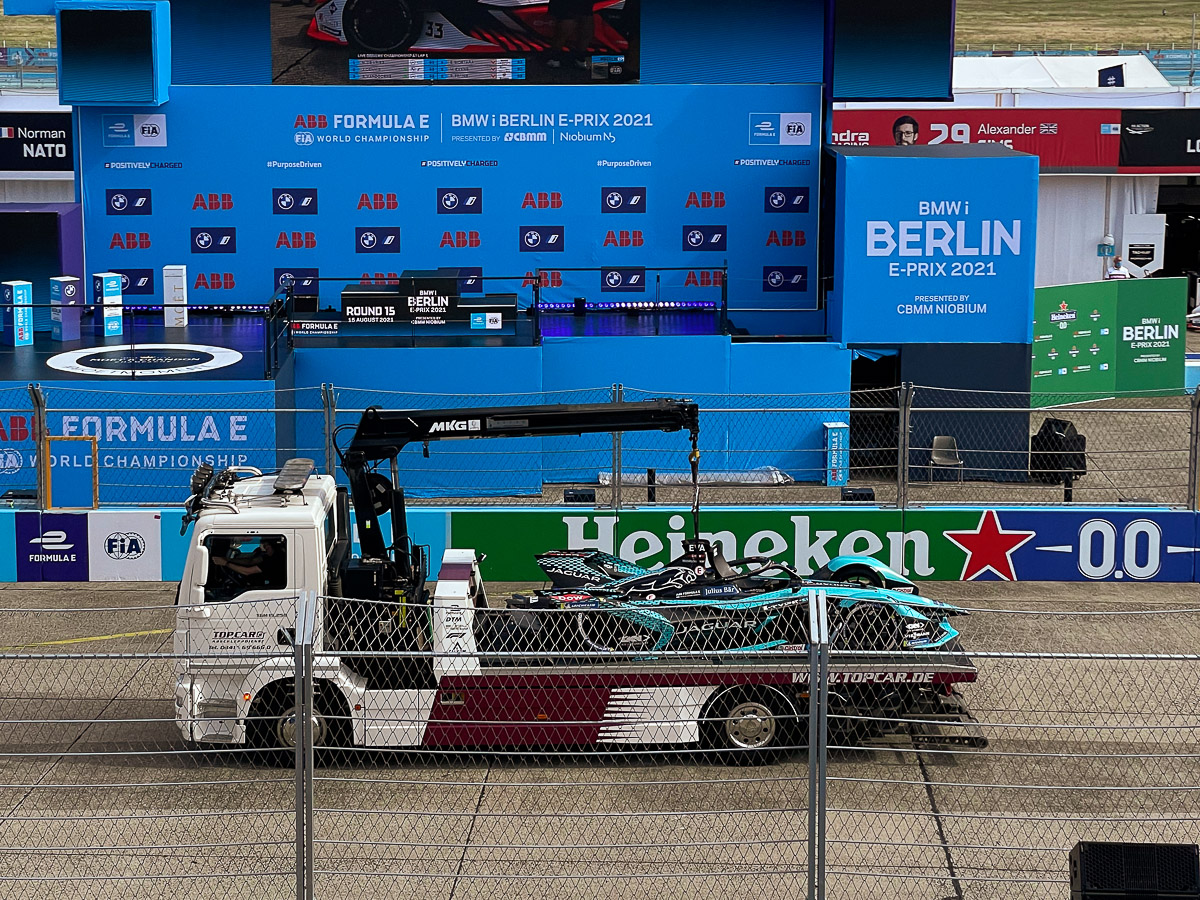 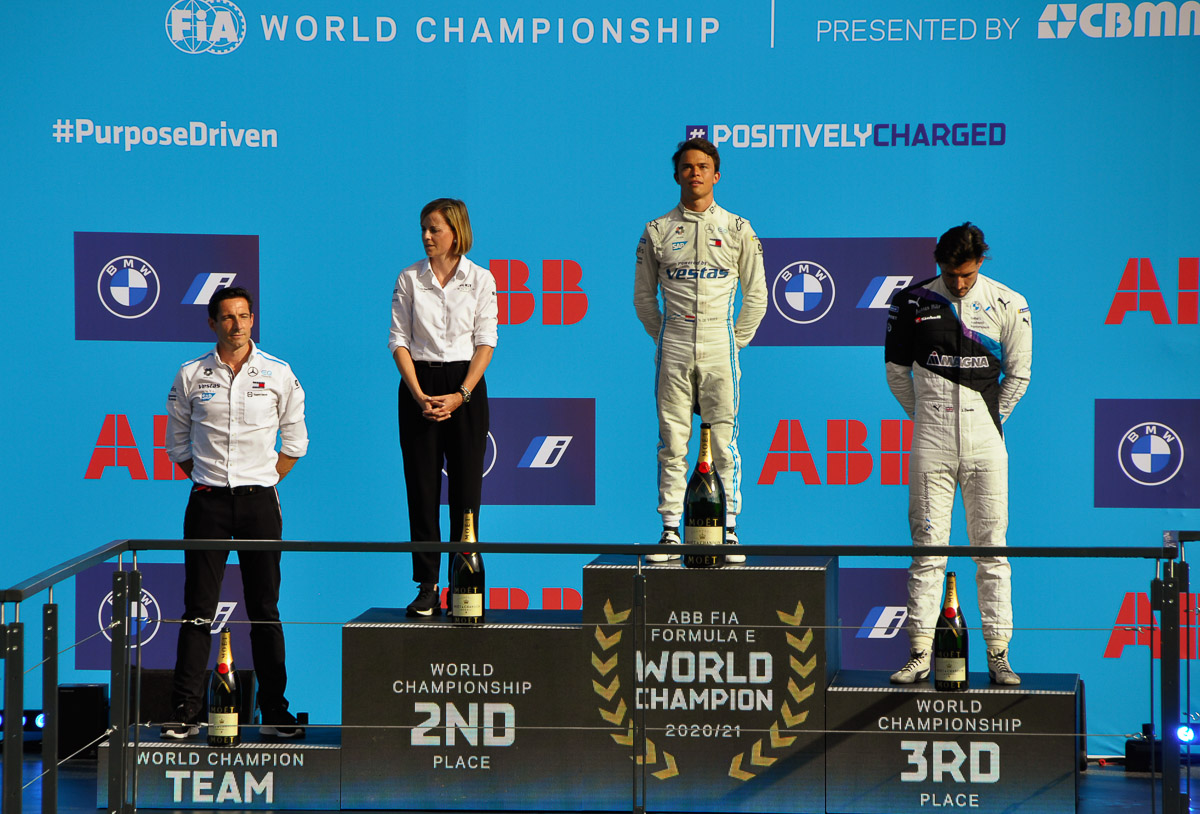 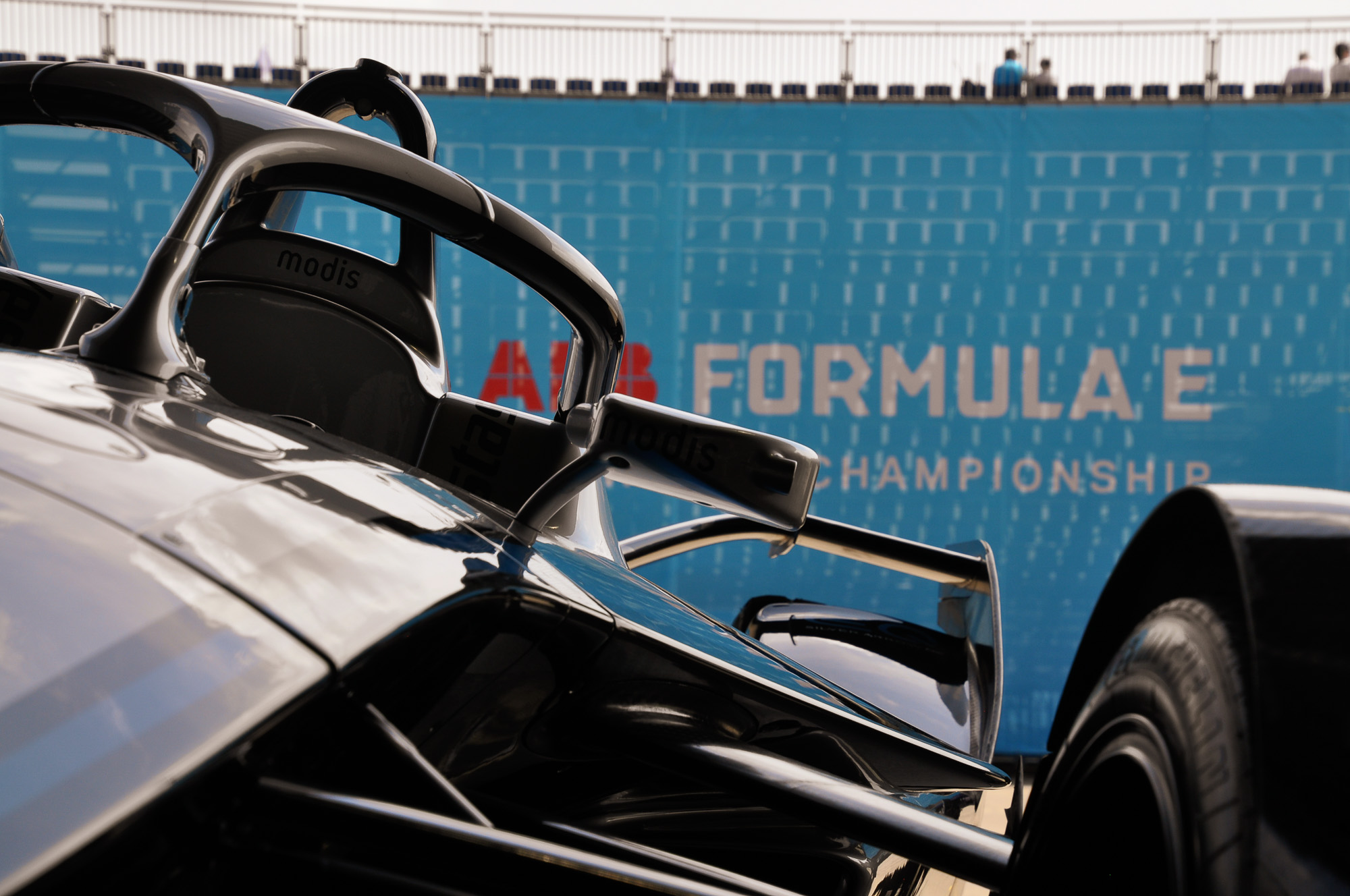 Lifestyle
→
Motorsport
→
Article
Formula E - Between a Rain of Confetti and Disillusionment
Share this article
A crash at the season finale for one of the favorites already at the start and the withdrawal of three top teams from the series: the 2021 season could hardly have ended worse for one or two Formula E fans. But that's just a one-sided look at the end of a season that had so much more to offer and thrilled the many thousands of visitors to the city circuits.

Yes indeed: in Berlin, there was no second opinion for the 5,000 spectators present on each of the two race days on Saturday and Sunday: Formula E offered great sport with its two final races on the grounds of Tempelhof Airport. And more than that: the event on the sun-drenched weekend offered a closeness to electric innovations that whetted the appetite for the drive technology that is new to many.

After all, Formula E is not just about a race on a narrow City-racetrack; it is the many information events in the surrounding area that point racing enthusiasts toward a new E-era. It was noticeable that many children accompanied their parents to Tempelhof Airport. A youthful audience that I have not seen to such an extent for a long time in this form at the more prestigious Formula 1 races in Europe.

In the so-called “Allianz E-Village”, there was a real Formula E fan festival, with information booths, the latest electric cars (virtually to touch and sit in) and the playful discovery of the latest innovations and games. Generously spread across the interior of the airport apron, visitors were able to sit in the new Daimler flagship, the Mercedes-Benz EQS. At Porsche, visitors were informed about the latest engines for Taycan and Co. and at Heineken, a sponsor from outside the industry, visitors were able to pump water for their own consumption using a rotary function. The Safety Car, an all-electric BMW Mini, was available for pre-race insight, as were the Formula E cars from Audi and Mercedes-Benz EQ.

The highlight from my point of view: the 'girls on track' initiative supported by ABB, where girls between the ages of 11 and 18 are introduced to racing. ‘Female empowerment at its best’.

The waiting time between qualification and race was shortened for the international spectators at food trucks, catering from local Berliner Currywurst to burgers, burritos and the lot. In general, it was a colorful crowd, all vaccinated or with negative tests on this weekend in Berlin Tempelhof romped.

A Breakdown of the Race Itself

A race distance in Formula E consists of 45 minutes plus one lap, the start is from a standstill, which promptly became a stumbling block for one of the top favorites for the title, Jaguar driver Mitch Evans. His Formula E car wouldn't go on after a short jolt, stopped and was rudely wrecked at the start by a trailing driver who couldn't get out of the way. Nothing much happened to either rider, except that for the best-placed Evans the race was already over after 3 seconds. In an extremely exciting race, it was then Dutchman Nyck de Vries who secured the World Championship title for himself and the Constructors' World Championship for his Mercedes-Benz EQ team.

This year, the Formula E Community stopped at seven different locations before Berlin. After the start in Diriyah in February 2021, it went through Rome, Valencia, Monaco, Puebla and New York City to London. The venerable Tempelhof Airport was once again a worthy backdrop for the season finale. Due to COVID, there was a double race in Berlin, as FIA rules requires a minimum number of races for the world championship title.

The downer for the end of Formula E in 2021 is the withdrawal of three German racing teams. Even before the race in Berlin, Audi and BMW announced that they would no longer be competing in Formula E from the coming season.

Audi is on its way to the Paris Dakar Rally and is therefore participating for the last time. The Dakar Rally is an opportunity for the Ingolstadt-based company to break new ground as a pioneer and gain experience in the field of electric mobility under extreme conditions. As a founding member of the series, Team Audi Sport ABT Schaeffler says goodbye to Formula E after 84 races.

"Audi was the first German manufacturer to compete in Formula E. In recent years, the series has accompanied our brand in its transformation to electric mobility and given us many unforgettable moments that will forever remain a part of our history," says Julius Seebach, Managing Director of Audi Sport GmbH and responsible for motorsport.

BMW had justified its withdrawal from Formula E with a focus on the 24 Hours of Le Mans. The Munich-based company sees more scope for development here. In Formula E, a standard chassis and batteries are mandatory for all teams. However, Audi and BMW are focusing on their further development and testing under racing conditions.

After the shower of confetti had passed and the champagne showers had dried up, the blow came from the victorious Mercedes-Benz EQ team, of all people. On Wednesday, after Nyck de Vries' world championship title, the Stuttgart-based company announced its withdrawal from Formula E. Although the title defense will still be started in 2022, after the last race in Seoul in 2022, it will be over for good.

"When we entered Formula E, we approached the series and its innovative approach to motorsport with an open mind. In doing so, we invested a lot of hard work into the team to build it up and make it competitive," commented Mercedes-Benz Head of Motorsport Toto Wolff. "Now we will give everything to ensure that we successfully complete our Formula E adventure in season eight." He added that the company is relying even more on Formula One as a development laboratory for the roadworthiness of the new vehicles.

Insiders, on the other hand, suspect that all three dropouts are frustrated by the complicated regulations for Formula E races and criticize the lack of sporting relevance of the series. Audi driver Lucas di Grassi, for example, was punished very severely for a supposedly wrong maneuver on race day and was thus no longer able to intervene in the title fight.

What remains of this Formula E racing series?

Despite all the prophecies of doom, Formula E will once again attract many fans to the city circuits next year. Vancouver, Cape Town and Seoul are three new locations that will attract not just local visitors but international crowds as well. Clearly, the Audi and BMW brands will be missing from this racing spectacle and the classic fan of these two brands will regret this.

But at the same time, new players are entering the Formula E market: with the Chinese vehicle manufacturer NIO, with the E-flagships Nissan and Jaguar, but also with small, innovative teams such as Envision Virgin Racing or DS Techeetah, highly exciting challengers are competing in a segment that is open to new names. And so, Formula E is seemingly becoming a reflection of developments in electric cars we can see on our roads. Here, too, the challengers such as Tesla, NIO, Lucid, Rivian or Fisker were originally known to few insiders only - and that is precisely what makes the future of e-mobility so appealing.