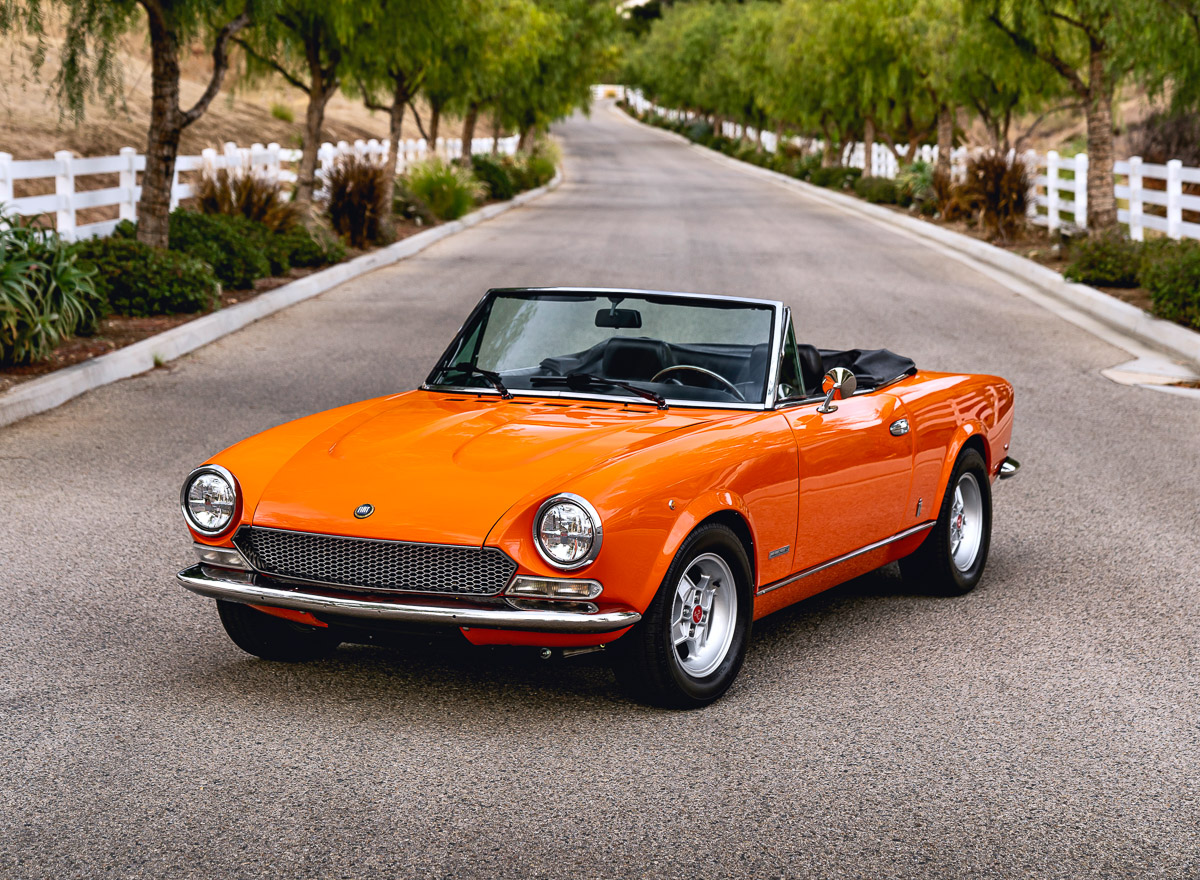 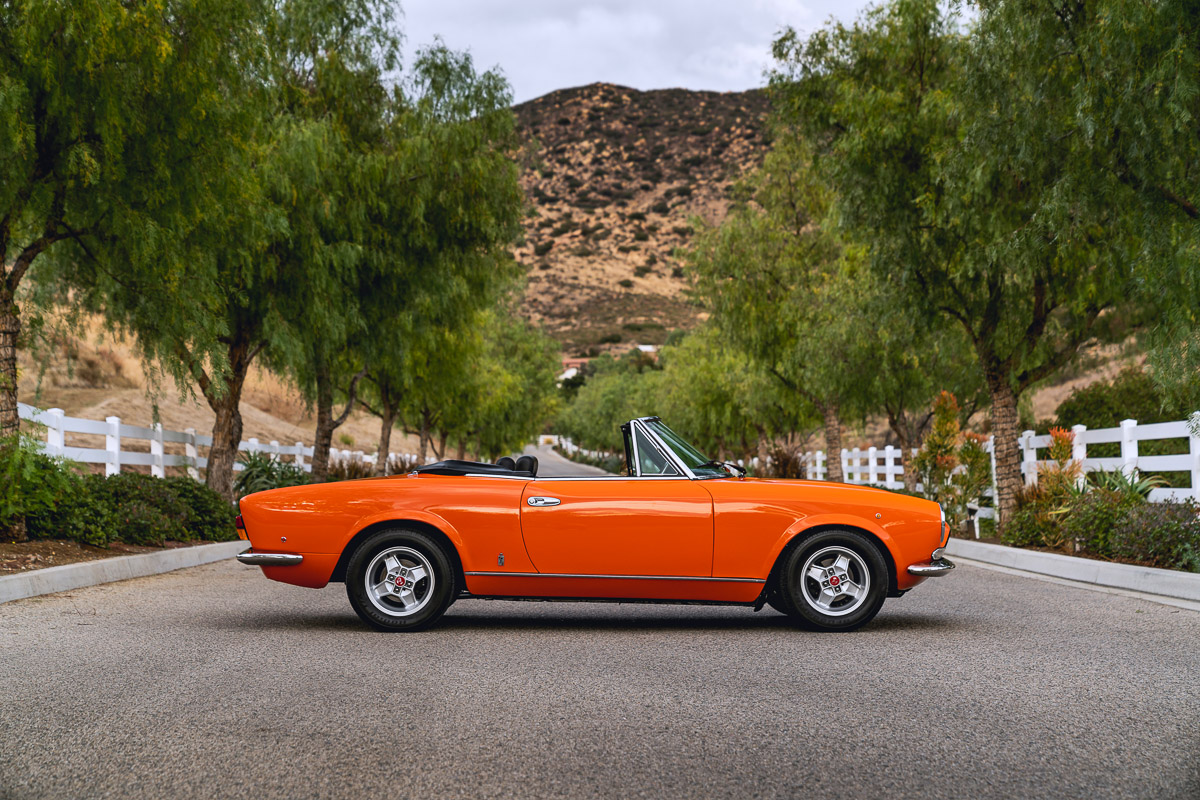 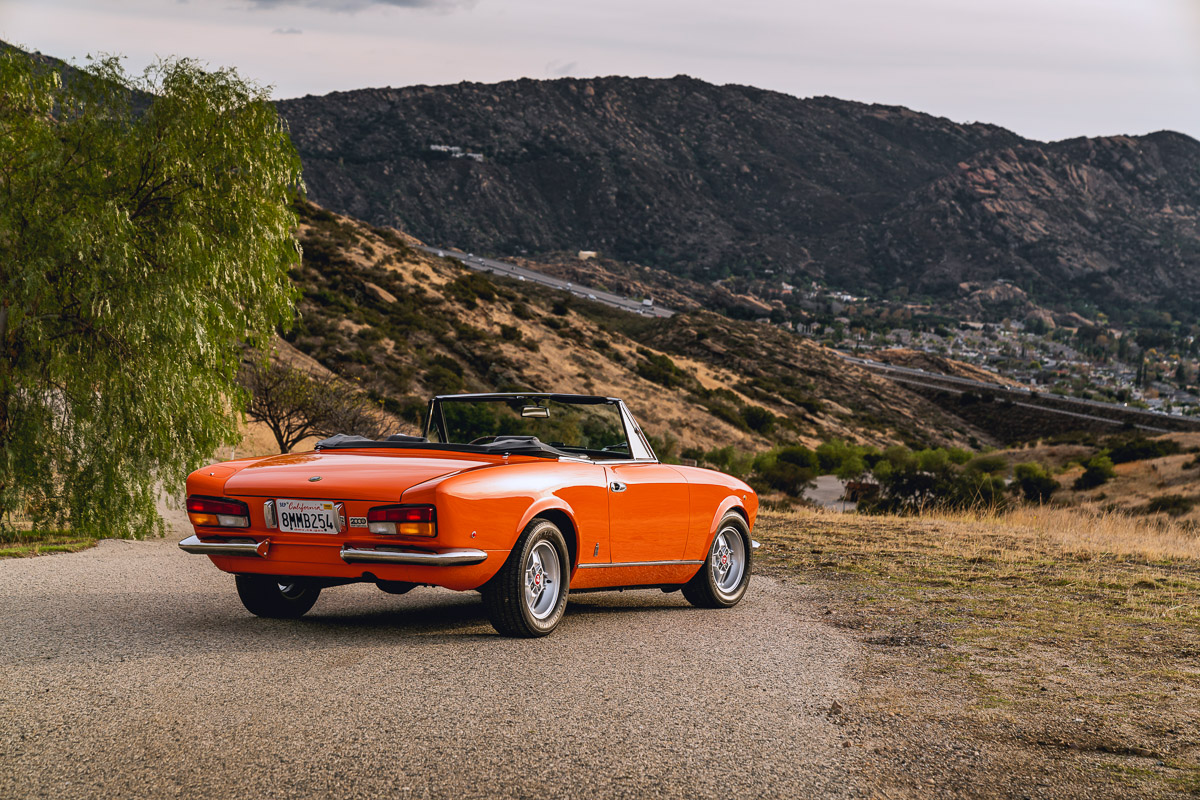 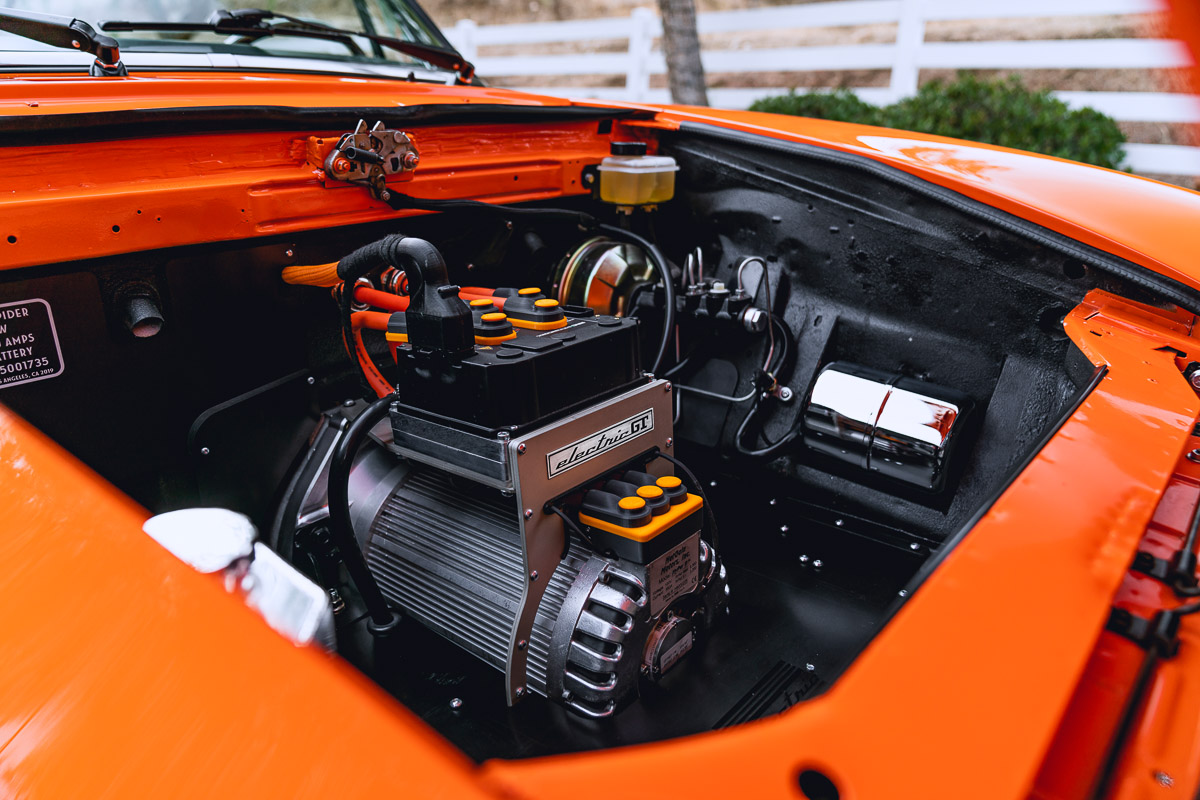 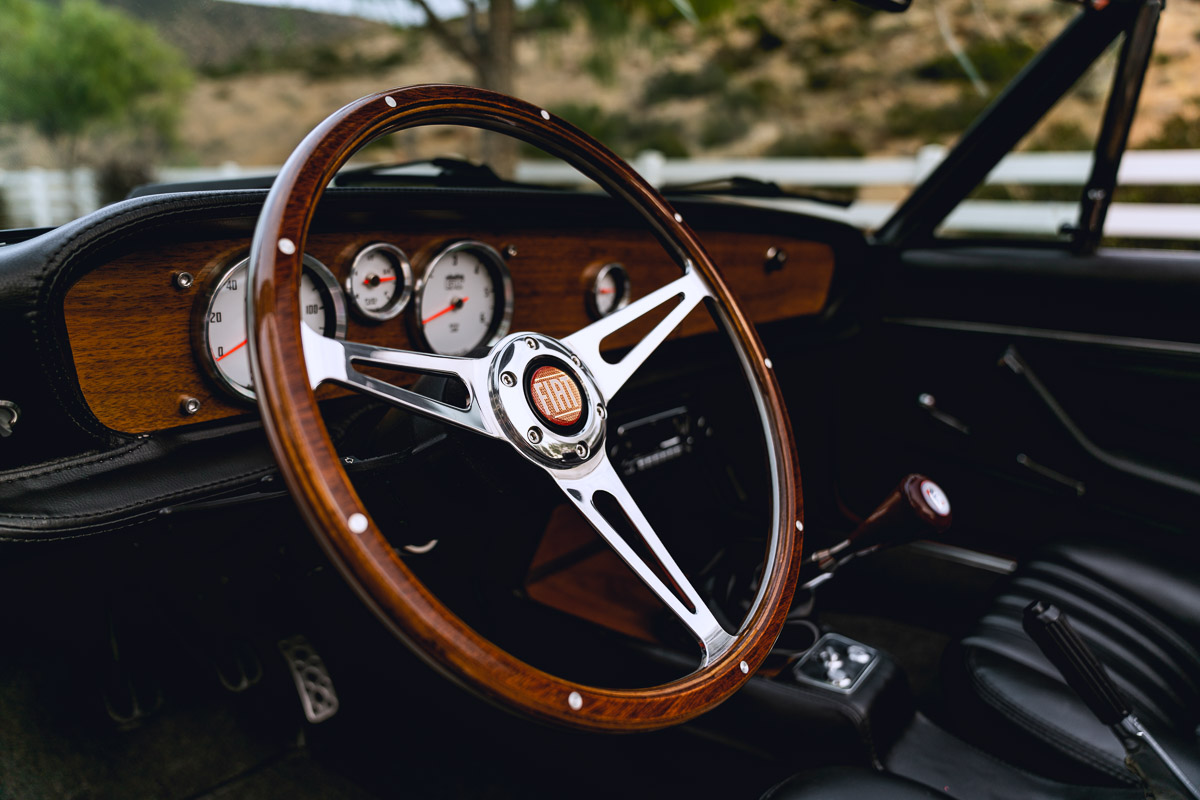 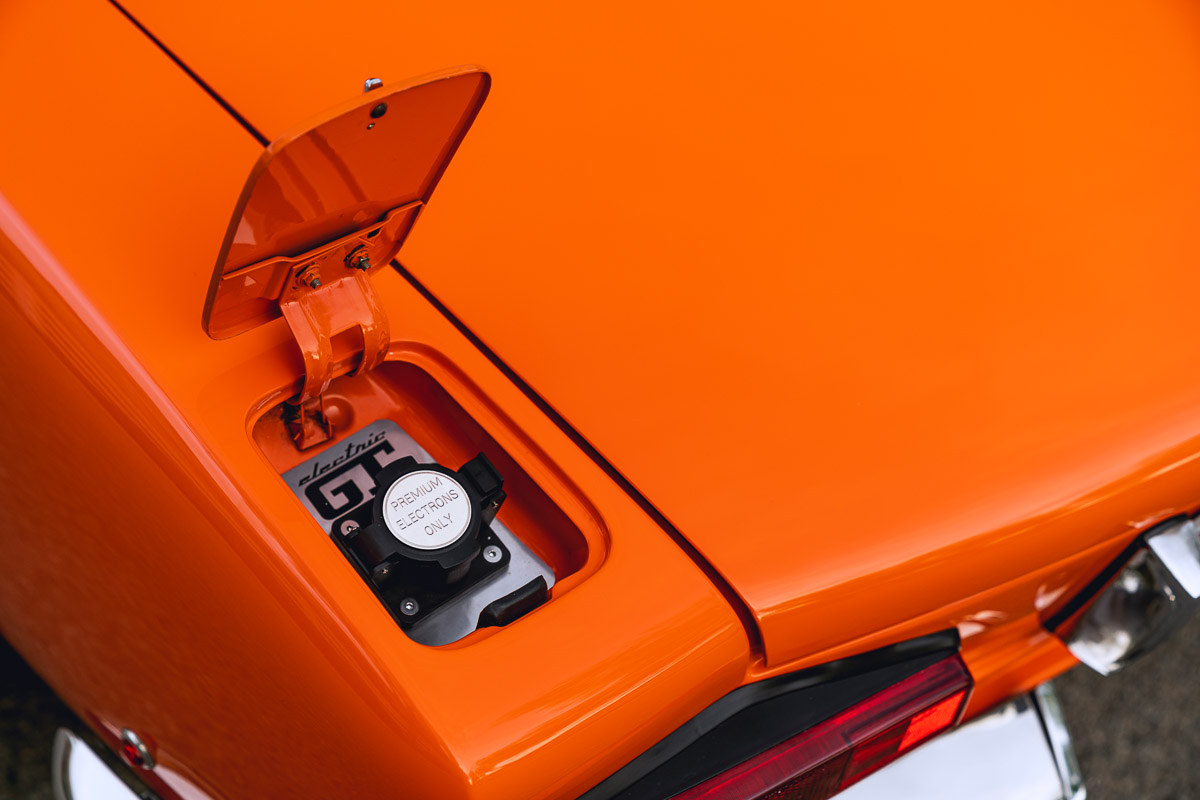 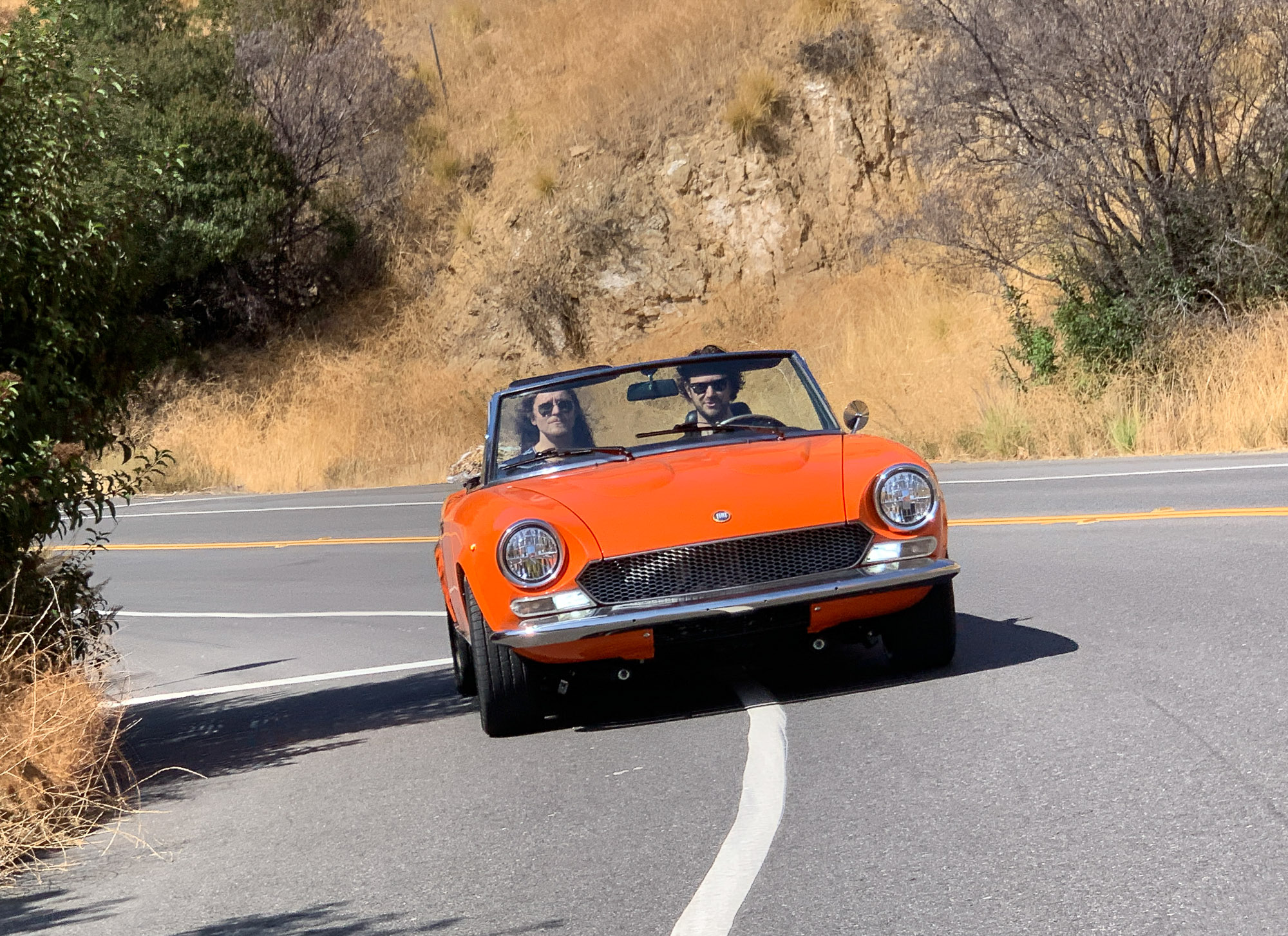 Electric GT's FIAT 124 Spider ©Electric GT
Lifestyle
→
Sustainability
→
Article
Is The Future Of Classic Cars Electric?
Share this article
When you think about classic cars, there are two distinct points of view—the first consists of pure driving enjoyment and, in most cases (not all), style and coolness. However, the second point of view conjures up images of steam billowing from under the bonnet, recovery trucks and dirty fingernails. But, with the current rise in popularity of restomods, the negatives of classic car ownership are becoming far less of a problem.

The concept of a Restomod car is to take a classic car along with its character, provenance and looks and make it better with modern engineering. Imagine a gorgeous classic car with superior handling and comfort that isn’t going to break down every time you drive it anywhere.

Improving older cars is not a new concept, but in recent years it has been turned in to an art form by companies such as Singer. They transform nineties Porsche 911s into beautiful cars with a more vintage style. These ultra high end and expensive machines feature carbon fibre bodywork, flawless craftsmanship and, of course, more power and improved handling.

Restomods are a niche market, but there is an emerging area within the niche, of electrified restomods. This is where the engine and transmission are sent to the scrapheap and replaced with electric motors and batteries.

Several specialist companies offer the service of electrifying classic cars and fitting all the necessary upgrades to cope with the extra power. Often they will fit these cars with Tesla motors and batteries, giving them insane performance figures.

IS THERE DEMAND FOR ELECTRIC RESTOMODS?

The demand for electric restomods is very high and increasing as we get closer to the point where electric cars will be more commonplace. Some classic car drivers love the fact that they can keep their pride and joy running well into the future by electrifying it. However, some purists believe it is sacrilege to replace their V8s, flat sixes and buzzy little four-cylinder engines with a whirring electric motor.

Electric Restomod companies recognise that the purists are older men who enjoy getting their cars ready during the winter months for summer driving. But, younger drivers hold off buying a classic car because they don’t want to spend their winters changing head gaskets and oil filters, even though they love the idea of driving something unique and characterful. These people also want to be able to drive their cars into city centres without having to pay extra charges, which is becoming impossible to do in older cars.

The typical electric restomod driver is someone with disposable income that wants an exciting car that stands out amongst modern machines.

WHAT YOU CAN EXPECT FROM AN ELECTRIC RESTOMOD

Restomod companies try to keep their car's ownership as authentic as possible, without the drawbacks. Many of them allow their customers to choose custom interiors, colours and specifications.

You can expect an electric restomod to be original but with several enhancements, such as heated seats, climate control, Sat-Nav and modern sound systems. But the most significant improvement, is the way they drive. Electric motors give you a wave of torque available whenever you want it. The upgraded suspension components and brakes improve their performance in the corners, too. Therefore, you don't lose the engaging driving experience that classic car drivers love so much.

Californian based company ElectricGT specialise in these conversions. They have put together several packages that are turnkey EV System swaps. They have developed these packages to replace V8, V6 and four-cylinder engines starting from $32,000. These packages give you everything you need to electrify your muscle car, classic sports car, or 4x4.

ElectricGT started out in 2014 after founder Eric Hutchinson decided to convert an old Ferrari 308 GTS to electric. He wanted to bring it up to date in terms of its performance, as it wasn't up to the standard of modern sports cars. The company has grown from strength to strength since then. This is a very niche market supplied by a number of small conversion companies providing reliable weekend cars with more power.

This is echoed across the Atlantic in Newton Powys, Wales, by Classic Electric Cars. These guys will convert any car from the 1950s to the early 1980s to any standard you like. They will do anything from an EV conversion to full restoration jobs to create your dream electric classic car. For example, VW Beetle conversions start at £40,000 to over £60,000, depending on your specifications. Or you can bring your classic mini up to date from around £45,000. But, Electric Classic Cars build serious cars; these are not just novelty toys. Their 1970s Porsche 911 is a testament to this. It has more performance thanks to the electric drivetrain and improved handling, but they have also fitted it with power steering to make parking easier, regenerative braking and a 200-mile range.

WHO IS BUYING CLASSIC RESTOMODS?

None of this sounds cheap, but these companies are pioneers at the forefront of what is the future of classic cars. The people that buy these cars are the ones that were buying Teslas in the early days and those that can afford to pay for classic style combined with modern performance and reliability. Electric restomods are built to the highest standards, and as word gets out, they will draw some buyers away from purchasing modern sports cars.

The early popularity of electric cars and hybrids was accelerated by celebrities being spotted driving around in them and arriving at premiers. It only takes a couple of A-listers to be seen driving around LA or St Tropez in an electric Jaguar E-Type, Mini, or Alpha Romeo to give this niche the publicity it deserves.

Electric Restomods are like time machines; they go forwards and backwards in time simultaneously. They are super cool and allow the driver to drive something tasteful and unique, without the drawbacks of classic car motoring. The initial price for early adopters will be significant, which means their growth in popularity will start off slowly. The other barrier is people’s attitudes to such a dramatic change in direction to what they are used to.

Not everyone will want to swap their Hemi V8 for an electric motor, but not everyone will have to, as everyone’s circumstances and passions are different. But if you are considering a new power source for your classic car, an electric motor is a viable solution. Electric conversions for classic cars will become more popular, and they may be the only way we can continue to drive these cars in certain parts of the world in the not too distant future.