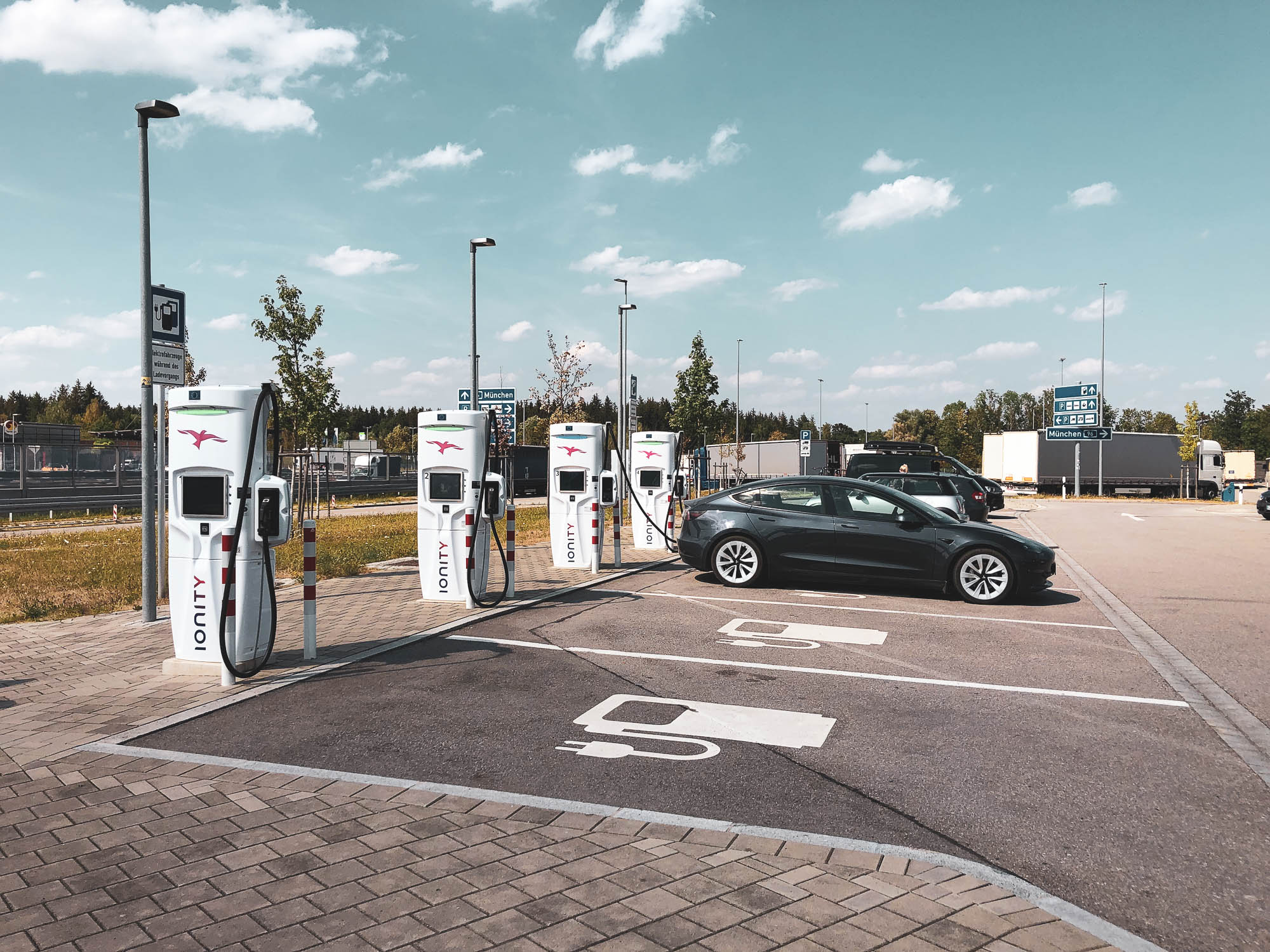 Mobility
→
→
Article
How Fast Charging Works While On Your Summer Vacation
Share this article
Anyone like me, setting off for southern Europe this summer with an electric car, will certainly have looked at the availability of charging stations with some concern. The expansion of fast chargers on the highways in France, Spain, Portugal, Italy and Croatia is making significant progress. But whether the announced chargers will actually work, or whether they will be occupied by other vehicles, are two key questions that we are all asking ourselves, especially in this current phase. That means, it is time to write a report on my personal experience and at the same time point out some codes of conduct. I will call these rules for the friendly interaction of electric car drivers 'charging etiquette'.

All of us e-drivers start our vacation trip this summer with a very satisfied smile on our face. This year's chaos at the airports, the crowds at the train stations, fully booked long-distance buses, car sharing costs going through the roof - an owner of an e-car doesn't have to fear all that. After charging at home, the vehicle is loaded for travel, sometimes packed with a partner, children, dogs, cats as well as suitcases, pillows, teddy bears and stuffed animals. Plenty of provisions, and off you go. The only way to ensure a stress-free departure is by electric car - just ask an air traveller how his or her adrenaline level feels before taking off from Amsterdam, Brussels, Cologne or Manchester airports this year.

And yet the journey to and from the southern parts of Europe is not always entirely stress-free, I readily admit. While we may start the journey to the European north, to Denmark, Sweden or Norway in a relaxed manner - here, the loading stations are similarly tightly timed as in Germany or Switzerland - the journey to the south sometimes becomes an adventure. At least that’s what some people say - time to have a look for myself.

A few statistics to get you started: 55 percent of all European fast chargers are located in just three countries: Germany, the Netherlands and France. These are publicly accessible charging stations with at least 150 kW of charging capacity. In 10-25 minutes, you can secure the continuation of your journey for several hundred kilometres.

Anyone who does not drive a Tesla is basically dependent on the 'remaining' chargers on the expressway. As of June 2022, according to statistics from the German Federal Network Agency, Tesla holds the largest share of the 8,000 fast chargers along Germany's highways, with 1,600. As of today, however, their access is far from being open everywhere for drivers of all electric car brands. With EnBW, Pulse (Aral / BP) and Ionity, other providers are expanding quite aggressively, especially along the highways. But they are struggling with the sometimes abstruse complexities of expanding the charging infrastructure in Germany. In the Netherlands and France, Fastned, Ionity and the classic petrol providers such as Total and Shell are setting the pace alongside Tesla, but here, too, the existing network of stations is initially being expanded above all.

Observations at fast charging stations in other European countries

First of all, there are really positive things to report, because the stay at the Ionity or Fastned charging stations is enriching. The interested reader knows that I drive a Tesla model myself. Therefore, I was only used to conversations with other Tesla drivers at the Tesla Superchargers. This is not wrong in principle, but how refreshing is the exchange with the drivers of other e-cars from Denmark, Sweden, the Netherlands or England. The Audi e-tron, Porsche Taycan, Ford Mustang Mach-E and the VW ID.4 and ID. 5 models were particularly well represented. Those seeking diversity in e-mobility exchange experiences at the charging stations. Here you go.

Some of the new e-car drivers started asking me questions, which showed me that we still have some ways to go in terms of our transformation to EVs. Here is one example: a look at the displays of the fast chargers often showed that their drivers were charging their batteries well above 80 percent. Now let me be clear: I don't want to presume here to be the schoolmaster for charging behaviour of European electric car drivers, but cautiously asked about the charge level, I rather experienced a questioning facial expression with a "am I doing something wrong?" Some drivers wondered why charging the last 10-15 percent of their e-car to 100 percent took so particularly long. Not only are these charging cycles above the 90 percent mark harmful to the batteries themselves. No, the long charging times also meant that other drivers couldn't get to the charging stations. For me, this is an essential part of training new e-drivers: charging at a fast charger should become just as much a part of the instruction as explaining frunk (if available) and recuperation of the vehicle.

What struck me in this context was the lack of reasonable queueing solutions at the rest stops. If all the functioning charging stations are actually occupied, it is important to avoid a chaos of waiting vehicles around them. This is not always easy, because the classic rest stops are designed to accommodate gasoline and diesel stations, and were not originally built for e-cars. And since we in Europe have visibly lost the English mentality of (complaint-free) queuing, we need guidance for those waiting. Ionity's solution this summer in France at their fast-charging stations was great: a friendly colleague (in my case always young men) waiting here at the weekend and giving friendly instructions to the newly arriving e-car drivers or providing help to find their way around in the order of the next chargers. This is what I call service, especially to the new group of e-drivers.

Where does this lead us?

Let me end this post with a few personal thoughts and findings while fast charging on my long distance travels:

Firstly I am not afraid of any long distance travel at all. I enjoy these breaks all 300 to 400 kms, as it helps you arrive in a more relaxed manner at your holiday destination. With existing speed limits in most European countries, your personal adrenalin level stays low while driving down south as much as driving to the Nordics. Too easy. Fast charging helps you ‘fill’ your electric vehicle within 10-25 minutes, a time slot that often is shorter than the break with a family and/or with your animals.

With more and more electric cars coming onto our roads, the development of charging stations that provide a charging experience will be key. Tesla drivers know it: the Superchargers usually work well, but the location for these are mostly tucked behind fast food restaurants or gambling houses at the far end of the service areas. A true experience looks different for me, which the Fastneds or Ionitys of today have clearly understood. A roof over your head helps against potential rainfall, light at the charging station and a good display providing information about the charging are essentials. Together with partners such as coffee shops or restaurants providing good and healthy food, clean toilets and a safe environment charging will become fun or at least a nice break on your long distance travel. It will help to slow you down and prepare for the holidays or the stay at your destination.

In Switzerland, most fast chargers along the freeway were found next to a service station with a restaurant or even a shopping mall attached. Best example for me on the road between Zurich and Munich is the Rastplatz Kemptthal where I had to repark my vehicle after chagrin to 80 percent at an Ionity station, as the family wanted to properly finish a nice meal before continuing the trip.

There’s plenty of work to do for charging providers, mainly on the charging experience side, but also in making sure that in summer 2023 the expected many many new EV-drivers can enjoy their long distance drive, as much as we did ours this summer.