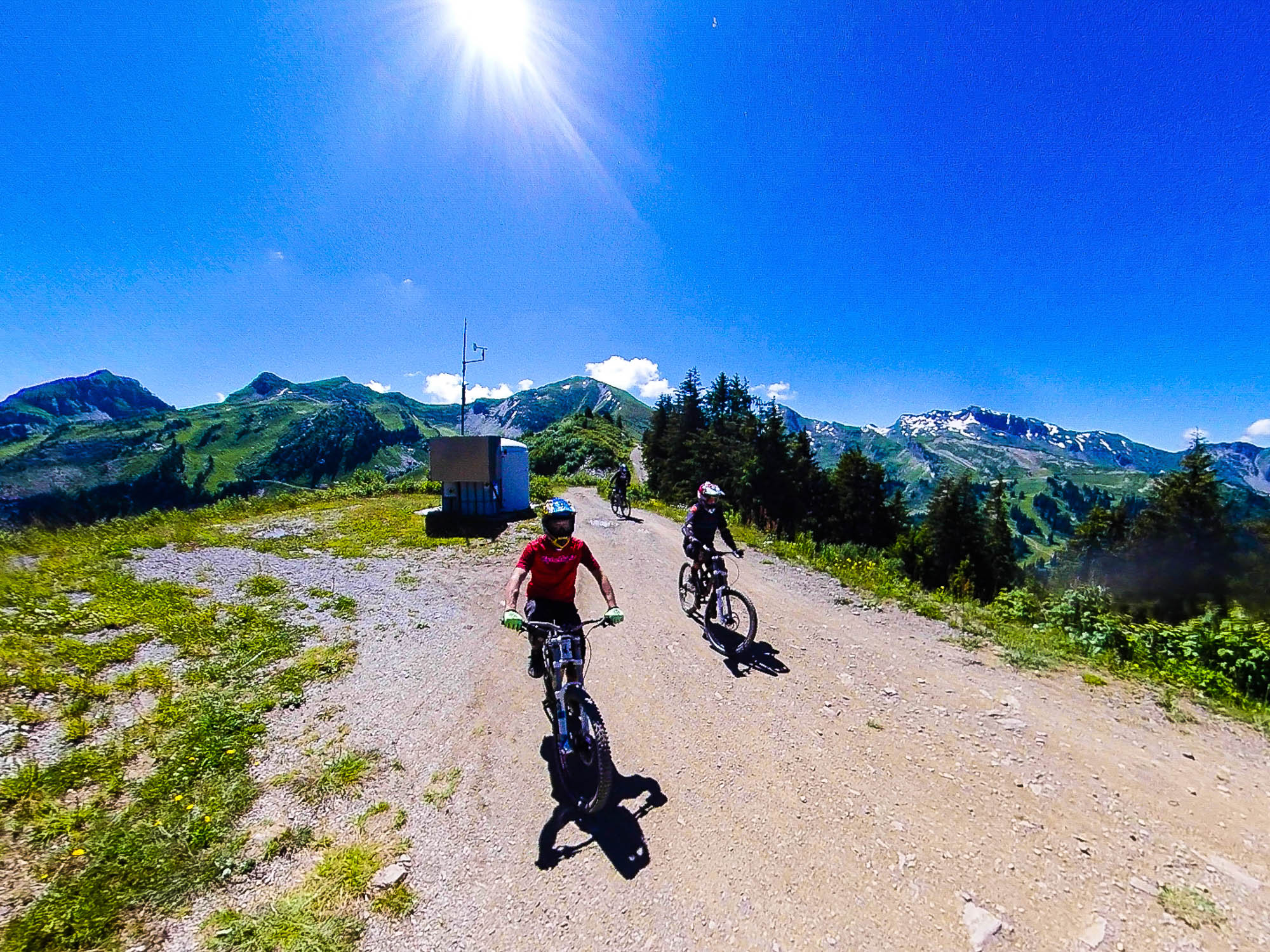 Lifestyle
→
Travel
→
Article
How Electric Bikes Are Changing The Alpine Lifestyle
Share this article
My wife Carolyn and I have been living in the French Alps for a few years now. We moved here to enjoy the winter seasons, as we are avid snowboarders. But, we also came to love the summer mountain bike scene. Riding bikes in this incredible landscape has become one of our favourite things to do.

We live in Morzine, which is in the Portes du Soleil, an area that straddles the French-Swiss border. It is one of the world's largest ski areas, but it becomes mountain bike heaven when the snow melts. We use the ski lifts to transport our bikes up the mountains, cutting out hours of gruelling climbs all over the Portes du Soleil. The lifts give us the chance to enjoy high altitude rides and epic descents.

To ride here, you need the right tools for the job. Enduro mountain bikes with huge suspension travel and aggressive riding characteristics are king in these parts. But since we have been here, we have seen more electric versions of these incredible mountain bikes appearing in the mountains.

At first, many people (me included) dismissed electric mountain bikes, as they were considered the cheat's way of riding. Of course, this ignores the fact that everyone reaches the top of the mountain on a chairlift. But people regarded e-bike riders as lazy, as once you are up the mountain, the amount of uphill pedalling was pretty minimal.

Therefore, electric bikes were seen as something that non-serious mountain bikers would ride.

As electric bike technology has evolved and attitudes have changed, people now see the potential of electric bikes. They open up so many more opportunities to enjoy the mountains and make getting around easier.

With the mountains being a giant playground for many, electric bikes are set to become super popular.

There is more to mountain biking in the French Alps than quick-fire lift-assisted downhill tracks. There are some fantastic enduro routes that take you to some of the most spectacular views in the world.

You can access some of these enduro loops using the lifts. But once you have ridden them a few times, you will want to explore further. The problem with exploring these routes is the lack of time and energy. It takes a lot to get to these routes before you even start your planned loop on a regular mountain bike.

However, with an electric mountain bike, you can ride further and faster. Therefore, you can find new terrain much more easily. Alternatively, you can make multiple loops in one day, which is excellent for fitness.

Unfortunately, the ski lift system closes in September before opening again in December. But many locals and visitors still want to go mountain biking. Electric mountain bikes allow people to get to the trails much more easily. So, now they can do multiple runs and still ride entertaining trails when the lifts are closed.

Between September and early January, much of the French Alps become very dangerous. The extra danger doesn't come from the weather or any natural phenomenon, but hunters. It is very difficult to get to a safe place during the hunting season. The hunters pretty much have free range to hunt wherever they want to, and there are lots of terrible accidents every year. But, electric mountain bikes allow people to access more remote places and the few areas hunters are not allowed to enter.

"At first, many people (me included) dismissed electric mountain bikes, as they were considered the cheat's way of riding."
Tom Fortune

It isn't just mountain bikers who are seeing the benefits of assisted pedal power. Electric commuter and hybrid bikes are also finding their place in the alps. I spoke to a Belgian couple who have had an apartment in Morzine for many years. They come to stay several times per year, but they have only just started exploring the other local villages since they bought ebikes.

Before ebikes, they would just drive or walk to the places they know. But, thanks to the help they get from an electric motor, they are encouraged to go further.

As more tourists start to ride electric bikes around Morzine in the summer, local businesses enjoy the benefits. Tourists use family ebike rides as part of their holiday and to get to the other attractions in the area.

When it comes to alpine living, pretty much every journey involves an uphill struggle. Therefore, older people can find daily life challenging. For example, getting your shopping home is tough without a car, especially as the local supermarket sits at the bottom of the valley. But, we now see many older people riding home from the supermarket on electric bikes.

In addition to this, there are quite a few people who work in Morzine but live in the neighbouring villages of Montriond or St Jean D'Aulps. These people are also adopting electric bikes and scooters to commute.

How Electric Bikes Are Being Promoted In The French Alps

Ski resorts are very nervous about the future. Lower altitude resorts are under threat, as they are getting less snow due to global warming. Therefore, they are doing what they can to slow the process down while finding ways to attract tourists.

A great example of this is Les Gets, which is also in the Portes du Soleil. Les Gets is one of the more forward-thinking resorts in the area and has introduced a public electric bike hire scheme. The scheme aims to reduce the number of cars on the roads while allowing people to get to all the area's activities easily.

A huge mountain bike event marks the official opening of the Portes du Soleil each summer, the Pass'Portes du Soleil. But, organisers have created the e-Passportes du Soleil for ebikers. You can read about it here, but electric bikes make the event more accessible to more people.

Electric bikes are less popular in winter, but you can still ride certain ones in deep snow. The ski resort of Avoriaz offers electric fat bike tours in the winter, which is great fun.

So, no matter who you are, with all the benefits electric bikes give us, it is easy to see how they are enhancing the Alpin