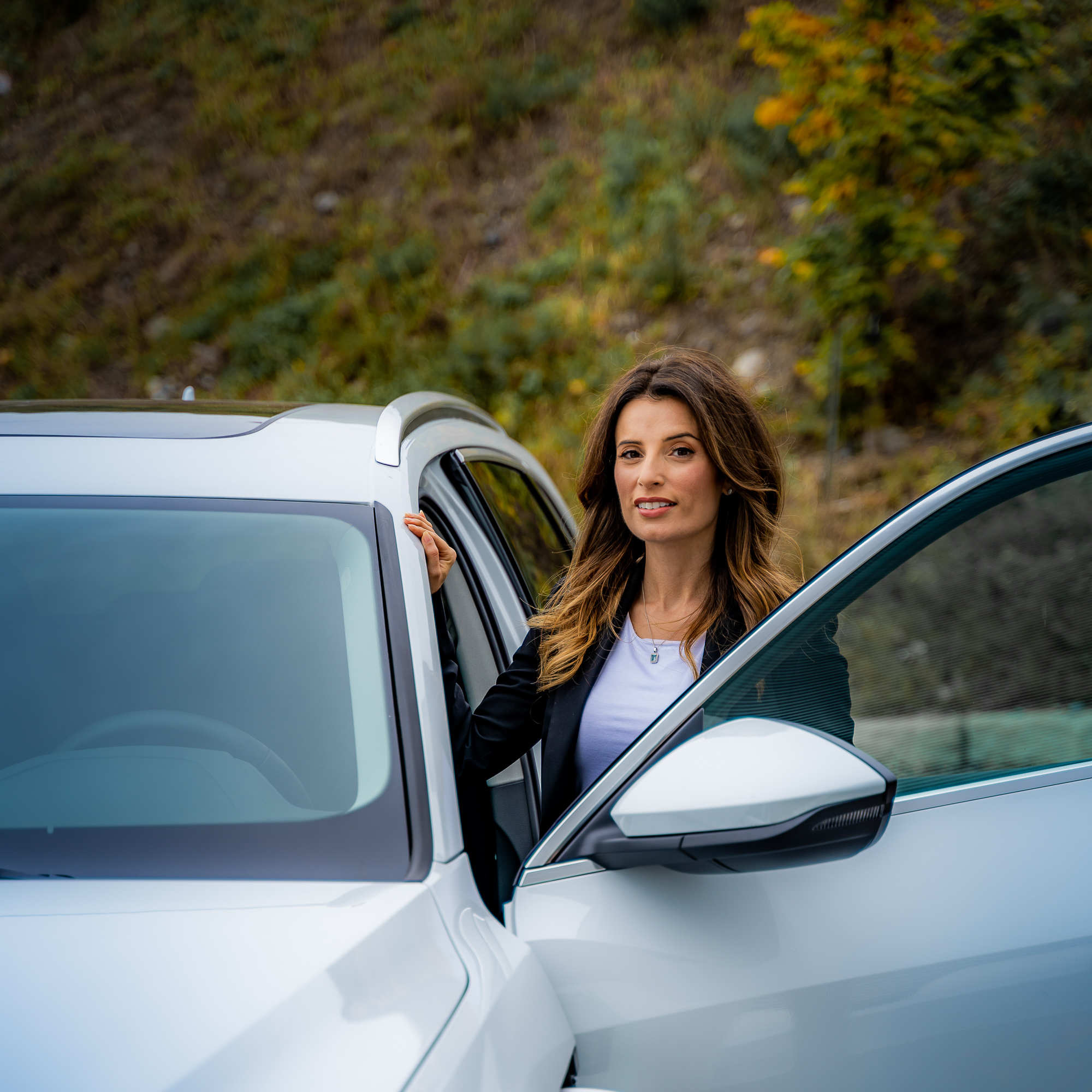 People
→
Movers
→
Interview
Accelerating Electrification: Stephanie Medeiros
Share this article
We sat down with Stephanie Medeiros from Montreal, Canada, one of MOTION’s supporters from day one. In a male dominated technical environment, Stephanie plays a vital role in driving innovation for fast charging technology at ABB. She explains how she got into her current role and how she sees the developments at Formula E help regular EV drivers around the world in terms of safety and ease of charging.

Michael: Stephanie, thanks for your time today. Could you kindly introduce yourself to the MOTON readers and explain us what you do?
Stephanie: Sure, I handle E-Mobility global accounts for ABB and I am based in Montreal, Canada. I work with large companies around the world that have massive fleet electrification projects or are just doing mass installations of electric vehicle charging infrastructure - public or private.

Michael: How did you get into your job?
Stephanie: It all started around 14 years ago when I joined ABB as an electrical engineer in a technical role. Today I am of course more involved in the EV strategy rather than doing the actual engineering of the technology As an engineer, I love the technology piece, but now I enjoy the strategy and long term thinking aspects of my current role. I stepped into the EV world in around 2016 where I was put in place to start and lead the EV charging business in Canada where I got to experience charging infrastructure of passenger vehicles, electric buses, and other heavy duty vehicles like electric trucks. And now in my current role I get to see EV charging infrastructure installations around the world.

Michael: What makes your job so exciting?
Stephanie: The first thing that I love about my role is the industry itself - as soon as I stepped into this emobility world I just fell in love with it because it’s super-fast paced, dynamic and it’s all about technology and innovation. The technology moves super-fast in this space. As you know, say a few years ago we talked about 50 kW being ultra-fast charging, but now we consider 350kW charging being ultra-fast charging. So, in my role, I can take part in this rapid technology changes and all the while making the world a better place. This industry is made up of dynamic people who are open to  fast-paced technology changes and are also passionate about making the world a better place. I’m excited to be one of them and to work alongside such passionate people. Another thing that makes my role exciting is that I feel my work has a direct positive impact on the future of emobility. While I was in my Canadian role I took part in the SAE standardization committees where I participated in drafting the new standard for overhead charging for heavy duty vehicles. So, my feedback helped shape this standard and how heavy-duty vehicles are being charged now and in the future which is really exciting to me.

Michael: You told me that you also have a second global role, please tell our MOTION readers about it.
Stephanie: During my time at ABB, I was also responsible for technology integrations within the ABB Formula E ecosystem. Formula E is one of the most exciting developments in sustainable transport and sport today, providing a competitive platform to develop and test e-mobility technologies while building awareness for the need of a sustainable transport. The newest technologies in emobility are tested and being pushed to their limits on the race track, then the technology improvements are brought to the mass market vehicles that you and I can have in our everyday electric vehicles, all this really helps in the acceleration of adoption of electric vehicles. ABB is the title partner of the race and part of that partnership is to develop the charging infrastructure for the next generation of electric race cars.  The improvements that we’ll get from the chargers at the races will be brought to the electric vehicle chargers to be installed all around the world. It’s exciting to be part of writing the future of emobility together with Formula E.

Michael: Over to some questions about you, Stephanie the Person, where do you live (most of the time)?
Stephanie: Born and raised in Montreal, so I am Canadian, but I also have a Portuguese citizenship. I’ve lived and spent time in many countries including the home country of my parents, Portugal, in Taiwan, Peru, and in gulf countries such as Kuwait, Oman and the United Arab Emirates.

"This industry is made up of dynamic people who are open to the fast-paced technology changes and who are also passionate about making the world a better place."
Stephanie Medeiros

Michael: What would be your dream EV?
Stephanie: My dream EV, not necessarily to own, because I think it is a little bit too extravagant, is a Formula E car. Just to drive it and to feel that power, responsiveness and speed of the car, it’s the ultimate electric vehicle and I don’t think there is anything quite like it.

But in terms of a practical EV to own, it is so hard to choose just one, because there are so many amazing electric vehicles that are coming out or are already out. Getting a little more practical for my family lifestyle: we live in the centre of Montreal and my husband and I are a 1-car family. We don’t need two cars. But that one car, talking practicality, has to be good enough and tick all the boxes for our lifestyle. Yes, we don’t commute to work every day anymore, but I used to do that pre-COVID. Also, on weekends we are super active as a family. We ski and go to ski cottages which are about 200km away, or in summer, we go to the summer cottage by the lake which is about 150km away. And Quebec winters can get very cold and really impact electric car’s range. We therefore made that decision to get a plugin-hybrid MINI and it was based on all these factors. The drive, our range, and being able to be 100% electric on our everyday short commutes. So, throwing out a couple of names of a ‘dream car’ after I have fun with my MINI and I would go on to the next car: I just did a test drive of the new Tesla Model Y – fantastic car – that is top on my list, but also other ones like the Porsche Taycan and the Audi etron.

Michael: What was the biggest surprise with your car yet?
Stephanie: To be honest, my initial thought was that I thought I was going to get this car for a year or so while the SUV or compact SUV full electric models with long range would be available in Canada and would then move on. But the biggest surprise was: I ended up loving the car. It is such a fun drive! It just ticks all the boxes! I didn’t think I would love this car so much and years later, I still have that car.

Michael: How about a story on your longest trip!
Stephanie: I took a trip once in a Tesla Model S 90D, the trip length was about 250km which is typically not a problem for this car’s battery range. However, it was a winter day in Canada with temperatures around -30 degrees Celsius. So, the choice was to either stop for a charge at one of the fast chargers along the route or turn off the heat in the car and freeze and pray that we would get to any charger at our end destination without the battery dying. I chose the heat and comfort over stress and discomfort of course. At the time, there was one fast charging location on-route with only one 50kW charger, and I’m so happy that I was lucky that it was available! As the car charged, I got some lunch and by the time I came back to the car 30 minutes later, there was a line-up of a few cars waiting to also charge. I’m very happy that charging infrastructure availability is improving across Canada so that long road trips can be more seamless when driving an EV. Adding a few hours potentially to a road trip is not a good idea.

Michael: What do your friends & family think about you being an EV-frontrunner?
Stephanie: They are happy, overall very responsive. The choice, obviously with my role and what I am all about. Of course the car I would have to have is an EV! Seeing that we are a one-car family, the car would have to tick all these boxes. If it were up to me I would push for a full electric car, but with my family, we take long trips very often, the current hybrid works best.

Michael: I have a final question on SheEO, an organisation you are an active supporter of. Could you please tell us about that?
Stephanie: The two things that I’m very passionate about are promoting electrification of transport and promoting gender diversity in male dominated fields. SheEO is a fantastic organization that I’m proud to be a part of. It’s a global community of radically generous women transforming the way we fund, support and celebrate women-led Ventures working on the World’s ToDo List. And this is very needed because let’s face it, the statistics are not great: women-founded companies receive only 2.7% of venture capital and 13% of all angel investment. While this is slowly improving, we still have a lot of work to do. The solution is SheEO's radical generosity! Currently, there are 5,000 women Activators, like me, in five countries that have collectively loaned out $5M to support 68 women-led Ventures. We have a goal to reach 1 Million women Activators and a $1B perpetual fund to support generations to come.

Michael: Stephanie, thank you so much for taking your time to speak to us and telling us your story on MOTION. We will surely meet you soon at a Formula E race!
Stephanie: It’s been a pleasure!